As many of my friends know,

Mason is obsessed with Trains.

He has been since he was around 1 1/2 and it still is going strong.

He hopes one day to become a train engineer.

For him, he has not been extremely into Thomas,

but the real deal.

at the San Juan Capistrano train station and watch the trains come in.

He knows which trains are which and much of their history.

Though at times this obsession has been over the top,

{especially when we had a train table}

we will be sad the day he stops enjoying them as much.

For now we embrace it and love them as much as him,

in fact Madeline likes trains too.

Around the holidays, we try to incorporate them into our traditions.

With the events of last week,

it made it hard to get into the spirit, but we mustered the strength to do so for the kids.

We drove up to Roger’s Gardens to view the Christmas tree decorations,

see Santa and most of all see the train display.

It was a brisk day and the train display seemed to fit right into the scenery.

I believe the train was more fun than the viewing of the trees,

Christopher Radko ornament and we would have to fork over the $45.00 per each one {yikes}.

Mason and Madeline enjoyed taking a picture with Santa

and being able tell him what is on their Christmas list.

We were lucky enough to have Grandma Kathy with us to capture the moment. 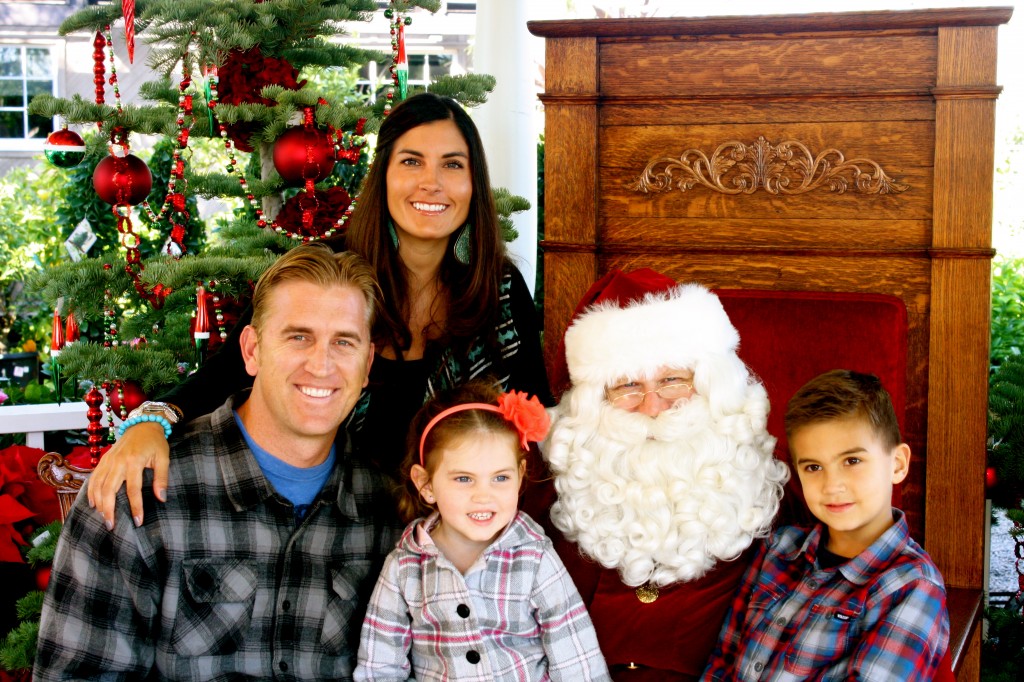 It was a fun experience.

I have wanted to visit with my kids since my newspaper days,

but we finally made it happen, and the kids did GOOD!

We had our second annual experience of more trains.

We drove down to the train station and watched the

The train stop benefits one of our favorite holiday charities:

The Spark of Love.

We brought a unwrapped toy and donated it to:

{the actual event is free, but they collect new toys for needy children}

They had two fire trucks parked right up to the train station.

The train rolls into the station completely decorated in lights.

All of Santa’s Reindeer sing all of the kid’s favorite carols,

and of course Santa makes an appearance with Mrs. Clause.

There is a little skit and candy canes and then,

the train goes on its way.

Short but a magical experience for any child that loves trains.

Today, ABC 7 will be collecting for The Spark of Love

at The Honda Center in Anaheim.

The perfect way for us to help those in need 4 days before Christmas,

and you might see some of our firefighter friends collecting toys